The man in the rubber mask: The Toxic Avenger @toxicavengeruk 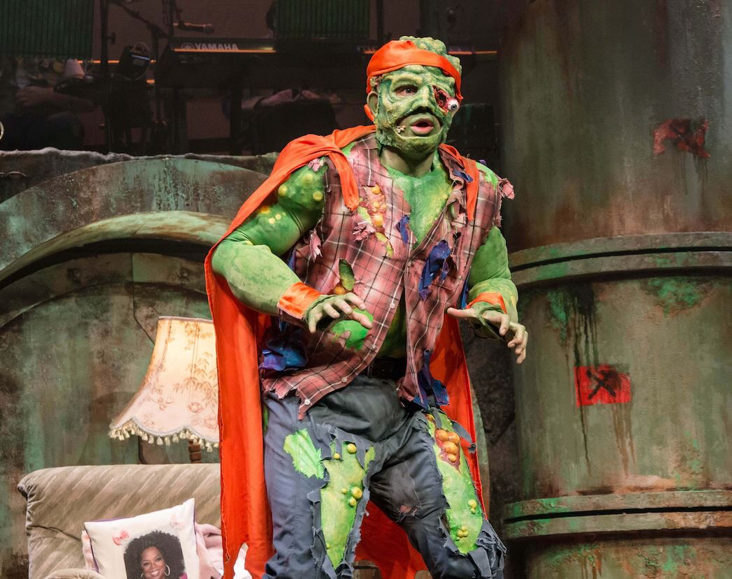 An eighties rock ballad score and a terrific energetic cast make The Toxic Avenger a lot of fun. It’s back in London at the Arts Theatre.

With just a small cast of five performers, they change characters, change sex and mutate. All while singing an eighties inspired rock score. It’s amazing and exhausting to watch.

The story is meant to be B-movie schlock. In Tromaville New Jersey, a nerd metamorphasises into a toxic superhero after being dumped into some New Jersey sludge by some jocks. He had discovered his local evil Mayor’s plans to use the town as a dumping ground for toxic waste from New York. Or something like that. And he falls in love with a girl. Who is blind. But the story is probably not as important as the people performing in it. Since they’re determined to show the audience a good time.

Working hard in the cast is Natalie Hope as the evil Mayor and mother of Toxie. The script allows this to happen due to some bad blood which means neither would be caught dead in the same room together. She’s hilarious with her ad libs and over the top vocals.

Playing various locals, hoodlums and women, Ché Francis and Oscar Conlon-Morrey manage to have the audience in hysterics.

As Toxie, the Toxic Avenger, Mark Anderson sounds great. But the production misses an opportunity to showcase his comic talents by concealing his face completely behind a latex mask.

It’s hard to get too serious about a show based on a cult eighties movie. But you also get the sense that there is also a missed opportunity. Turning a bad eighties movie into musical gold worked well with Xanadu. But here the book by Joe DiPietro is full of predictable jokes and crude references to blindness. If you don’t find a person’s disability hilarious you might wonder where the funny parts are.

Still, it sounds great under musical direction of Alex Beetschen. And when you walk into the theatre with its fantastic waste-dump inspired set by takis, you know you’re not seeing 42nd Street.

Directed by Benji Sperring, The Toxic Avenger is at the Arts Theatre until 3 December.