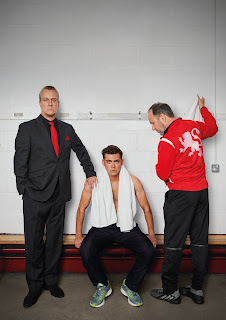 Patrick Marber commented that his play The Red Lion dramatises something about England. One part is about community and belonging, and the other part is about business. But it also could be about not being terribly good at the sport, either in playing it or managing it unless you're importing it. It's currently playing downstairs at Trafalgar Studios.

It's a locker room comedy-drama set in a semi-professional football club in the north. Kidd (Stephen Tompkinson) as manager has spotted Jordan's (Dean Bone) potential and puts him on as a reserve. But his real plan is to transfer him to another team. With a transfer, he and the club stands to gain financially.


Yates (John Bowler) was initially a great player for the team but now is reduced to preparing the team's kit. Over a rub down, he explains he wants to be a mentor to Jordan and understand the history and traditions of the club.

Alas neither Kidd nor Yates realise until its too late that their protege - despite his apparent unwillingness to bend any rules - is not who he seems to be.  Life (and injuries) get in the way.

It's fun watching the three men spar over football, traditions ambition and business. The performances are strong and there's a nice balance between humour and tragedy here as things don't go to plan despite all their best intentions.

The locker room drama The Red Lion works well in the downstairs space of Trafalgar Studios. As you walk in Yates is ironing the kit. It feels like you're in the locker room of some enduring club. In a way you are.

Directed by Max Roberts, The Red Lion is at Trafalgar Studios until 2 December