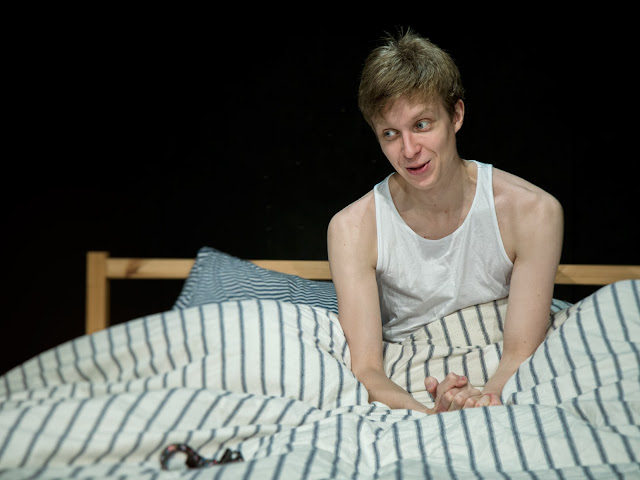 Awkward Conversations with Animals I’ve F*cked certainly has an evocative and attention-grabbing title. There’s also an animal-like performance by Linus Karp. He’s part awkward young man, part woodland creature and so he holds your attention. But once you realise the animals are real the rest becomes a letdown. It’s less awkward conversations and more repetitive conversations. The species changes but it’s the same story. It’s currently playing at Kings Head Theatre.

It opens in what looks like a student dorm room. Dirty sheets, dirty clothes and food are strewn across the floor. And Bobby is lying there on the bed. It’s the morning after the night before. And then he starts talking. Soon you realise that the trying on the dog collar is not quite role-playing. Next, he moves on to conversations with cats. Then sheep, monkeys and bears. Sure the conversations touch on his life and loneliness. There’s a hint about mental illness. But none of this is particularly convincing. The attempt to highlight some form of double standard re the treatment of animals and what’s socially acceptable regarding sex was unintentionally funny. And seemed to draw awkward silence from the audience rather than laughs. I was hoping that he’d contract anthrax or some sort of interesting bacterial infection after one of the encounters. At least that would give some perspective to the scenes.

This show was a hit at Edinburgh. It’s the kind of high-concept, edgy sort of thing people seek out there. But removed from this context it seems like a curiosity more than a comedy.

Directed by Katherine Armitage, Awkward Conversations with Animals I’ve F*cked is at the Kings Head Theatre until 27 April.