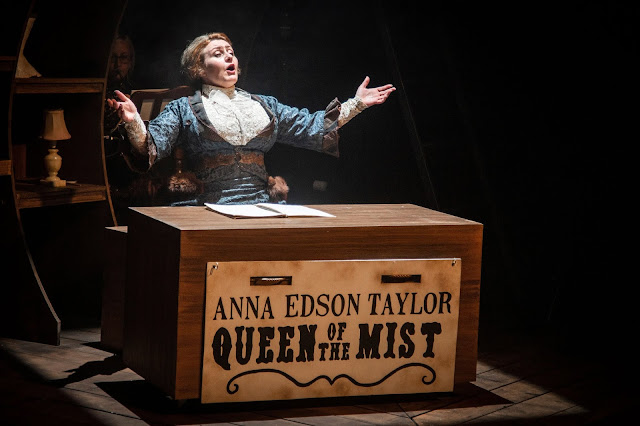 When sexagenarian Anne Edison Taylor becomes the first person to go over Niagara Falls in a barrel, she thinks it will lead to fame and fortune. But achieving recognition is one thing. Maintaining it is harder. Particularly if you're a bit boring. Or old. Or a woman. And it's 1901 by the way. Thoroughly modern women didn’t exist back then. Nor could they vote.

Queen Of The Mist is an unconventional musical for an unusual subject. It’s currently playing at Charing Cross Theatre. Against the backdrop of anarchists, suffragettes and presidential assassins, a woman designs her own barrel and goes over Niagara Falls as a way to make money and financial independence. A feat that no one else had yet achieved. Yet fame is fleeting, and things don't work out how she envisaged. Her Manager Frank Russell (Will Arundel) runs off with the barrel. People lose interest in her story. Suffragettes dismiss her as a carnival act. And she ends up spending the rest of her life (and most of the second act) impoverished and facing life alone. 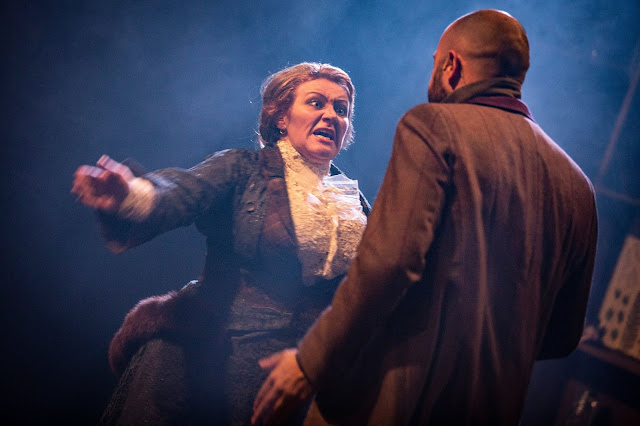 Trudi Camilleri's performance as Anne Edison Taylor is an achievement on its own. When she is not belting out songs about greatness, she is continuously navigating through the shifting emotions and doubts of the character.

Michael John LaChiusa's chamber musical zeroes in on Anne in the build-up and aftermath of her feat and never lets go of her. Through songs, drama and characters he keeps drilling down to what made her do it in the time she lived. Maybe she was ahead of her time. Maybe her greatest strength was also her weakness. Musicals like Chicago tell the same story of fame and fortune with more sex appeal and a higher body count. But it's rare to see a show that attempts to find the essence of why we do the things we do in such a detailed character study.

It's imaginatively staged by designer Tara Usher using the Charing Cross Theatre’s relatively new traverse staging. There are props on shelves either side of the stage. Boxes to pull out and become tables or stairs.

Under the music direction of Connor Fogel, it is also one of the best sounding musicals staged in Charing Cross Theatre too.

It may not be for everyone's tastes, but it’s funny, and the rest of the cast serve the material well in a range of roles. Sometimes there are shows that linger in your mind long after you have seen them. This is likely to be one. Even if it is just to marvel at the idea of lady in a barrel going over the precipice. That’s something to admire and fear a little.

Directed by Dom O’Hanlon, Queen of the Mist is at Charing Cross Theatre until 3 October. 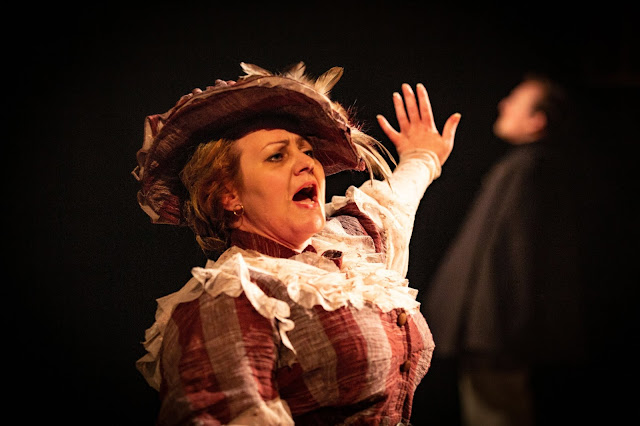