The Dorfman Theatre at the National is transformed into a thicket of imagination (and a few scares) in this brisk and evocative adaptation of Neil Gaiman's book of the same name by Joel Horwood. Even if you're unfamiliar with the book, this production directed by Katy Rudd, quickly establishes a strange and unusual world. And not just because it was set in 1983 when T-shirts were always pastel colours and hair had to have a perm. With a strong cast and endless theatrical tricks, you'll find yourself enthralled in its exploration around how people remember the past and the blurring of reality and fantasy that come with memories and time.

Opening with a funeral, a man returns to his hometown and stops by the place where he remembers a girl called Lettie who he knew as a young man. There he encounters her grandmother again and soon is transported back to the time when they knew each other as a boy, which just so happens to be the early 1980s. 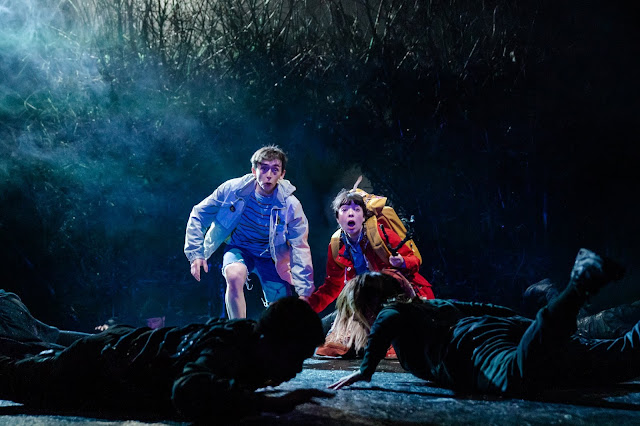 The boy (Samuel Blenkin) meets Lettie (Marli Siu) after a lodger living with his family commits suicide near her farm. This act allows an unknown supernatural being to try and enter the boy's world. Lettie, her mother and grandmother have experience with these things and soon the stage is set for Lettie to send the being back to where it came from. But it doesn't quite go to plan. In the battle, Lettie and the boy have with the being, a worm lodges in the boy's hand.

The next day the worm turns out to be a woman called Ursula with a penchant for cooking and wearing fabulous high-waist acid wash jeans. The rest is probably best left to experience first hand...

While on one level it's another childhood adventure, it's told with great theatrical flair. Puppetry, movement, sound and dramatic effects are all deployed to evoke another world. Samuel Blenkin as the "boy" and Marlie Siu as Lettie are engaging as the two loners from different worlds. Pippa Nixon makes a delightful villain of the piece.

A show that explores memories of childhood makes it easy to transport yourself back to the time. Particularly if you're a child of the eighties, the retro looks will be all-too-familiar. While on one level, it was a simpler time, the piece is a reminder that childhood can be scary in any period. Regardless of whether the fears are real imagined.  It runs until 25 January.