Young Joan can't sleep. Was there a bump in the night? Or a scream? She is staying with her Aunt Harper, and she reassures her it's probably an owl. They seem to be in the English countryside. But with her aunt's responses becoming less and less convincing as she pauses and thinks about them, young Joan knows she has stumbled on something sinister about the world. And not just because aunty isn't a convincing liar or her armchair is filthy and worn. Thus begins the short descent into a dystopia where people are rounded up for inexplicable reasons, and you're never sure who is with you or against you. It’s currently playing at the Donmar Warehouse.

It's a short descent as Caryl Churchill's piece runs only forty-five minutes. But in that time it's an unsettling enough to leave the audience nervously laughing. In the twenty years since its premiere, the fears of all controlling entities have only grown thanks to a vibrant network of social media, pseudo-news organisations and spin. What may have seemed far away then looks a bit prophetic now. 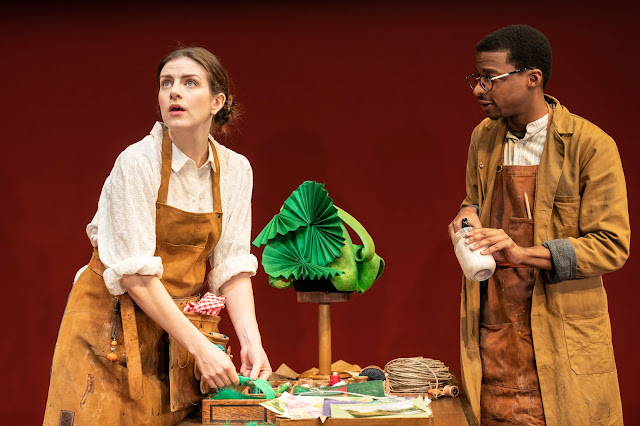 But it’s funny too. There's a scene with grown-up Joan (Aisling Loftus) and Todd (Simon Manyonda) making hats for an event.  As the days go by, marked by a blackout, they grow increasingly outlandish, until what they will be used for is revealed.

It's evocative with it's staging by designer Lizzie Clachan. There's a block glistening on stage. Is it the reflections of the night, the back of a lorry or prison wall? Christopher Shutt's sound design underscores the tension of the piece.

A brief encounter about fear and paranoia. It's almost over as quickly as it started, but still manages to leave an impression. Directed by Lyndsey Turner, Far Away is at the Donmar Warehouse until 28 March. 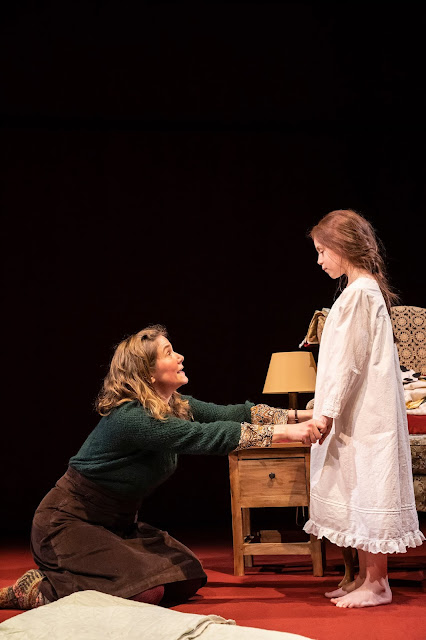