April 27, 2020
Virtual readings and podcasts for those in need of a theatre fix... And finding that they have more time in the evenings... 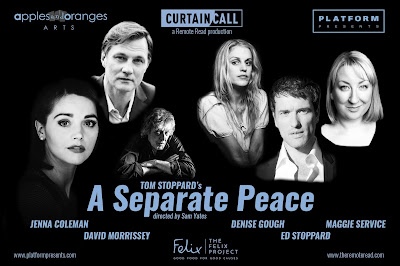 On Saturday 2 May at 7pm, David Morrissey, Denise Gough, Jenna Coleman, Ed Stoppard and Maggie Service headline Tom Stoppard’s, A Separate Peace. This is the first in a series of live-streamed virtual readings called The Remote Read.

It will raise money for creatives, stage technicians and food charities. Tickets for the live reading are available from £10.

The One Day of the Year

Alan Seymour’s play ‘One Day of the Year’ was seen at the Finborough a few years back. It takes an unflinching and honest look at the day Australians, and New Zealanders commemorate their war dead. This live reading, presented by Kathy Lette, is directed by Wayne Harrison. The Australian and New Zealand cast, including Mark Little, Kerry Fox, Daniel Monks, Celeste Dodwell and Paul Haley.

Commissioned by the Australian High Commission as part of its Anzac Day commemorations, it’s available  via the Youtube stream until 31 May.

And if you can’t see them, you can talk about them with Piece by Piece, the musical theatre podcast.

Launched in January, Piece by Piece is a musical theatre podcast produced by Pint of Wine Theatre company. Their latest episode virtually explores the Rogers and Hammerstein musical, Carousel. Previous instalments, which were recorded in front of a live audience, explore Guys and Dolls and Oklahoma. You can listen at the above link or via Spotify.