The elephant in the room: Elephant’s Graveyard @TheProdExch 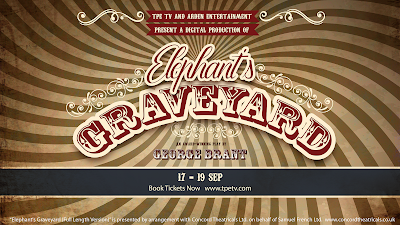 Saturday is the last day to catch the live stream of Elephants Graveyard. It's a title that piqued my interest, assuming that it was about a bar where old people go and drink.

But it's not that. Instead, it's a combination of oral history, legend and direct to camera straight-faced explanation of the only known lynching of an elephant. Adapted well to the world of COVID with sharp cuts, circus-themed backdrops and the now-familiar multiple camera squares of video streams.

It's not live theatre, but it's a welcome online diversion with an entertaining story that explores spectacle, violence, rumours and revenge. All the things that seem to be near and dear to our hearts at the moment.

Written by George Brant, it is set in 1914 in a small forgotten town in Tennessee where people were bored. So a circus coming to town was a chance to escape boredom and have some fun. But during the parade and freak accident happens. Soon rumours are spreading that culminates in this strange form of retribution.

The ensemble, speaking directly to the camera, brings a series of conflicting stories to life and gives you a sense of the time and place. But most of all it's great to see stories can continue to be told while theatres remain shut and the creative industries are struggling to survive.