When you chose to see a show called A Super Happy Story (About Feeling Super Sad), you know that something serious will get an upbeat musical cabaret treatment. But the cast's enthusiasm makes this show about discovering that it is ok not to be ok both compelling and a delight.

It focuses on Sally as she comes to terms with understanding what it means to be depressed. From her first feelings of not being there in the moment. To the denials that anything is wrong. To the false dawns that she's made a breakthrough and managing it. And while a show about depression and suicide may not be for everyone, every stage is covered with a healthy dose of curiosity and perspective.

And after nearly 18 months of lockdowns, the struggles of young people to find their way and carve out a future for themselves seems even more relevant.

Written by Jon Brittain, it's more of a show than a play. With props on stage and a cast of three that play a range of roles in Sally's life. As the super happy Sally, Madeleine MacMahon gives this piece its energy and joy as she veers from being in and out of control.

But the message of the show is about getting talking about how you feel. And finding one thing that makes you feel better. Like listening to another mixtape or watching something new, even if it's a theatre show on a well-established streaming platform.

Lovingly filmed in front of an audience at Wiltons Music Hall in June 2021 and directed by Alex Mitchell with musical director and composer Matthew Floyd Jones, A Super Happy Story (About Feeling Super Sad) is available to stream until 11 July on Stream Theatre. 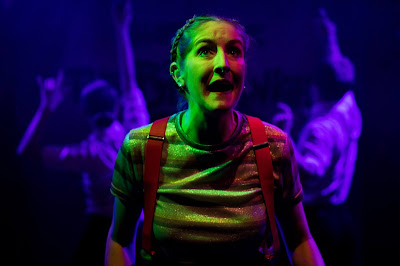