Suppose you have neither the time nor the intellect to sit through 236 episodes of Friends on Netflix. In that case, thankfully, writer and performer Brendan Murphy distils the ten seasons into his show, Friend (The One With Gunther), as told by Gunther, that guy who manages the coffee shop.

The coffee shop is where much of the action of the show takes place. It's a strange location that looks like the show's creators couldn't work out whether it should be a bar, a diner or somebody's living room. But as acknowledged here, Gunther was there (albeit more prominently from season two), and so he is the best man to give his view on the goings on. And since the Friends characters always talked so loudly in the coffee shop, he could hear everything.It's part recap and part piss-take. The latter suits if you missed all ten series of the primarily white, often homophobic yet still curiously popular series.

Murphy takes us back to a different time and place. The nineties. Before smart phones, high-speed internet and not as much choice about what to watch on television. With a series of recaps, audience participation and songs, he covers the ten seasons of Friends. No cliche or supporting character is overlooked as he reimagines the show from the perspective of Gunther.

Murphy, who was previously in the the hilarious The Crown Dual makes Gunther much more fun here. Particularly when compared to the best of moments you can see on YouTube. But maybe that's because apart from never caring about the show, he's prodding us to think about why certain shows capture the mood of the time.

Written and performed by Brendan Murphy and directed by Hamish MacDougall, Friend (The One With Gunther) is available to stream on Stream Theatre until the weekend and then available on Demand from next week until the 25 July. Even if you can’t stand watching Friends, it’s worth a look.

Live shows may be coming (when eventually permitted), and check the website for details. 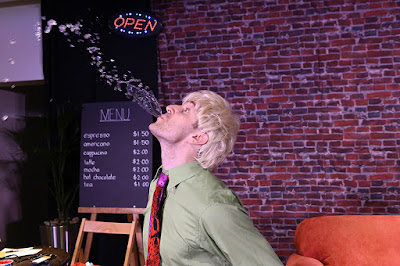