Upbringing, identity and family are at the heart of Foxes, by Dexter Flanders, currently at Theatre 503. It’s a powerful and often funny piece, sensitively portrayed by the ensemble cast with a lively soundtrack.

Daniel (Michael Fatogun) is a young black man trying to keep up with a life that is quickly racing away from him. He’s got study to do, he’s got his girlfriend, Meera (July Namir), pregnant, and he has a best friend, Leon (Anyebe Godwin), who wants to play more than just black ops with him.

The foxes in Dexter Flander’s play aren’t the ones running about tearing apart rubbish bags on the street. They’re the men hiding in the shadows, fearing rejection and fearing ridicule. There’s too much at stake for them to be who they are, and so they hide behind alpha male stereotypes, family and religion to pretend to be something they are not. 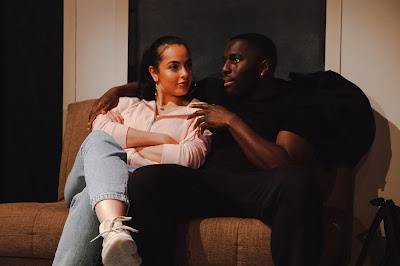 What makes this work so well is how it quickly immerses you into the world of the lives of this black B ritish family, creating a detailed portrait of who they are. The cast then brings it to life with their sensitive and often humorous portrayals. Doreene Blackstock, the matriarch of the family and Tosin Alabi as the smart younger sister, round out the cast. It may not be your typical coming out story, but it is a believable one.

The piece was on the shortlist for the Alfred Fagon Award in 2018. It was due to open last April, but we have had to wait a bit longer to see, thanks to the pandemic and lockdowns. It’s been worth the wait and another reminder about what’s excellent in the fringe theatre scene in London.

Directed by James Hillier, Foxes is at Theatre 503 until 23 October. There’s a relaxed and captioned performance on 20 October as well. 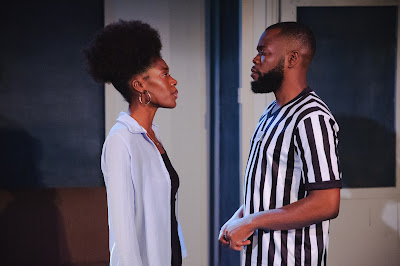