Charles Court Opera are back with their boutique panto season at the Kings Head Theatre. This time they are taking a story of epic proportions with Beowulf. It helps to know the epic poem. It helps to know various pop cultural references and songs thrown into the mix. Alternatively, you can let much of it sail over your head and enjoy the inspired silliness of it all. And indeed, that’s more than anyone could want out of a pantomime? It’s currently playing at the Kings Head Theatre.

In this version of Beowulf, the hero (Matthew Kellet) has a bit of an image problem. And not just because of his 80’s inspired hair. He expects to be the hero to save the day, but Princess Hrothmund (Julia Mariko Smith) can take the monster Grendel on her terms. Grendel doesn’t seem to be much of a monster either. Played by Philip Lee, he wants to make friends. His mother is another matter. 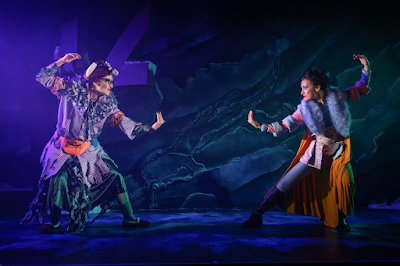 There’s some inspired messing about with both the tale of Beowulf and the conventions of pantomime. The principal boy here, Emily Cairns as Wiglaff, also happens to have feelings for Beowulf. And Grendel’s mother turns out to be a chain-smoking, wise-cracking villain played hysterically by Jennie Jacobs. She also happens to have the most irritating ear wormy song of the evening, based on Eminem’s “My Name Is”. Of course, you never find out her real name, but that’s the point. And try and avoid walking the streets of Islington after the performance without humming to yourself, “My name is… Grendel’s Mother.”

Typically pantos tend to sag at parts, but things move briskly along to its ludicrous conclusion. Given the potential for adlibs and audience participation (requested or not), I suspect things will probably only get sillier as the show continues. But for what it’s worth, it’s a lot of fun. Written and directed by John Savournin with music and musical direction by David Eaton, Beowulf, An Epic Panto is at the Kings Head Theatre until 8 January. In the same week that I saw a preview of a West End show and a panto at the Kings Head theatre, it was clear which one was better. This one is intentionally hilarious. 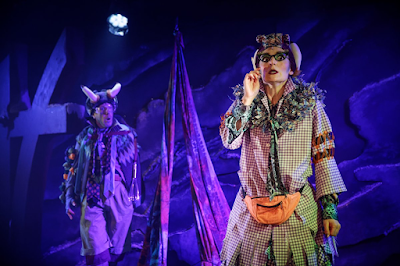