The novelty of this play, where everything is in the style of Stein, will either amuse or irritate, probably depending on how familiar you are with the works of Stein or willing to embrace them. And the basic facts of their lives are there. However, within the circular dialogue, a story emerges of a woman in the shadows of a genius. It’s making its covid delayed premiere at the Jermyn Street Theatre. 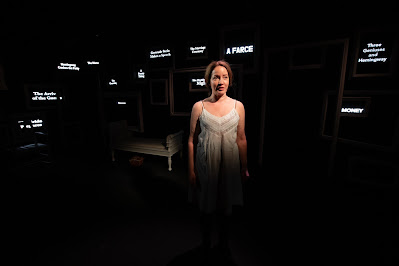 The short piece focuses on the life of Gertrude Stein (Natasha Byrne) and Alice B Toklas (Alyssa Simon) and their circle of friends who frequented their Parisian salon. Their friends included Picasso, Hemingway and James Joyce. Artists and other geniuses would frequently stop by to talk as geniuses wont to do about how they were geniuses. Alice, however, was not a genius. She spent most of her time with the wives of geniuses and to her thoughts.

Playing a host of geniuses, wives and mistresses of geniuses and other hangers-on are Mark Huckett, Kelly Burke and a resourceful stage manager. There’s also a fun set with title cards suggesting everything is a high spirited laugh. But it’s as if this show pretending to be a farce dares you to be distracted from the actual event, which is the life and compromises of Alice, living in the shadow of her more notable partner.

Simon, repeating her Off-Broadway performance as Alice, holds the piece together with her understated and as Alice. Her quiet reflections and casual comments give the piece so much of its clarity. Even if much of the facts are pretend, the desire for freedom and acceptance is universal.

Written and directed by Edward Einhorn, The Marriage of Alice B Toklas by Gertrude Stein plays pretend at the Jermyn Street Theatre until 16 April. 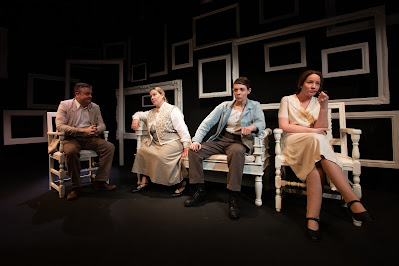