Coral can weather all sorts of undersea turbulence. Small and adaptable, it survives in its watery world. And so 100 years from when it last performed in the UK, we have The Coral. A piece about the forces of capitalism in a dystopian dog-eat-dog world. It's currently playing at the Finborough Theatre. Whether it has survived the forces of change over the last 100 years might be a topic of post-theatre debate on your way home.

There are no names in the piece. There are just people with characteristics such as the secretary, the daughters and the millionaire. The focus of the piece is on the millionaire. A play from 100 years ago will not keep up with inflation, but he is wealthy and powerful in this world. It is also a dangerous world. And so he also uses his secretary, his doppelgänger, so he can be everywhere while also sitting back on his yacht with his daughters.

But besides the troubles at his factories and pamphlets calling for change, he has other problems. When his daughters decide to take matters into their own hands and join with the workers, doing (god forbid) manual labour, he has to take desperate measures. 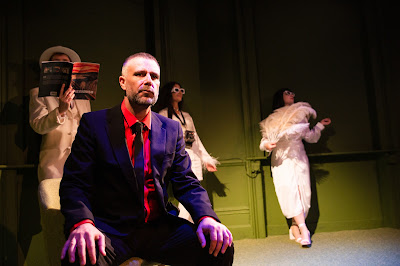 It's a simple production focusing on a dark and dystopian world full of shadows and harsh light. The doppelgänger is depicted with his face covered which is more unsettling than fun. However, it's more fun exploring the absurdity of it all, such as when the family are waiting for a cargo ship to pass by so they can pick up the eldest daughter, who was working on it as part of the crew. There are many potential comic moments here, but we don't always see them.

Nevertheless, it is a fascinating piece that comes into sharper focus in the second half, where the motives of the man who has everything become more apparent. Just pity the poor body doubles of the rich and powerful. Hopefully, they are paid well nowadays for the trouble of it all.

Directed by Emily Louizou and from Collide Theatre, a London-based female-led theatre company, The Coral is at the Finborough Theatre until 29 October. 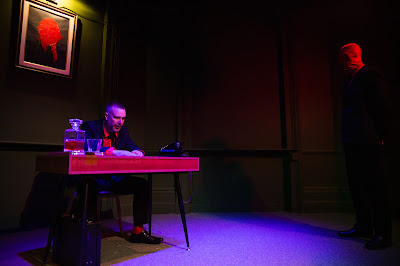