After seeing The Massive Tragedy of Madame Bovary, which is currently playing at the Jermyn Street Theatre, I found myself walking past the shops of Piccadilly wondering what Madame Bovary would make all of this apparent luxury. She was a woman ahead of her time, running up debts to live a life of luxury while having both a sensible husband and a lover. She would fit in in a nation where household debts have risen by a third. Even if she was living in a small provincial town.

So the premise of this piece by John Nicholson is whether it could be a comedy. Particularly given the time of the year when Christmas is approaching, and everyone is just after a feel-good night out at the theatre. The answer is, perhaps. The comedy is mostly sight gags and props, while the story of indebtedness and boredom in the provinces no doubt will enthral London audiences by reaffirming their own life choices. 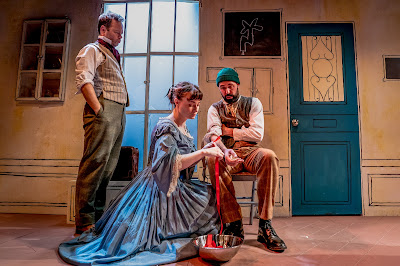 But while we get a sense of the basic plot behind Madame Bovary,  we don’t understand the motivation for the character. Perhaps there’s an assumption that London audiences living beyond their means and searching for thrills would make the connection anyway.

This production doesn’t take itself too seriously for a self-described massive tragedy. The characters break the fourth wall frequently, talking to the audience. They debate the merits of pre-interval drink ordering and framing the story around a pair of unlikely rat catchers who happen to prevent Madame Bovary from taking the arsenic she needs to take for the story to be a genuine tragedy.

The silliness is embraced by the cast, with Jennifer Kirby as the title character balancing the tragic elements with the inspired lunacy called for in this piece.

Ultimately setting aside the jokey props and cheap laughs, John Nicholson’s piece is thoughtful about how we treat classic texts and reframe them over time to suit the fashions or seasons. It might not be for all tastes and could probably do with a few trims to improve the pacing, but it’s a welcome change from either a pantomime or yet another revival of Dickens’s A Christmas Carol. Thank you very much.

Directed by Marieke Audsley, The Massive Tragedy of Madame Bovary continues at the Jermyn Street Theatre until 17 December. 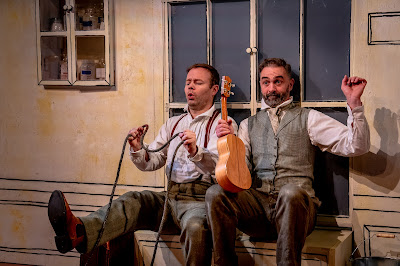