Larking about: And Then Come The Nightjars @Theatre503 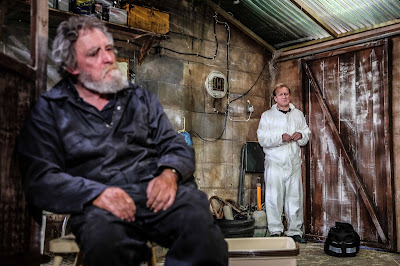 And Then Come the Nightjars, currently playing at Theatre 503, is a funny and at times touching two-hander that charts the period of the foot and mouth outbreak in 2001 and its aftermath from the perspective a a farmer in South Devon and his friend and local vet.

It is astonishing to watch such a finely drawn characterisations  and a beautiful looking production in the intimate space of Theatre 503. 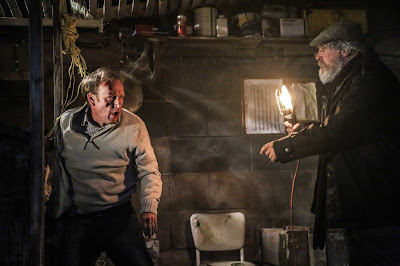 Set in 2001, dairy herdsman Michael (David Fielder) is battling to save his business and his livelihood. His friendship with local vet Jeff (Nigel Hastings) only makes the oncoming loss of his livelihood even more painful. Both have lost the women in their lives; Michael to cancer and Jeff due to being an alcoholic.

Incisive and fully of filthy words, there are hilarious scenes. Michael names his dairy herd after royals, noting that “We lost Camilla to the bloat in February.”

And the piece moves from the disaster of the foot and mouth outbreak to how over the passing of time, the loss of their livelihoods they have an unlikely yet enduring friendship.

Fielder and Hastings are well matched in presenting two believably different yet stubborn personalities. With their pauses, their glances and their ultimate affection for each other they are two mates trapped in their circumstances.

Written by west country playwright Bea Roberts, it won Theatre 503’s inaugural play writing award last year. What is fascinating about the piece is how it captures that outbreak (and the government response to it) meant the end of a way of life for some. Parts of the countryside would become to lost to farming as more economical uses such as tourism and suburban developments would soon come forward.

The production looks beautiful with a gritty cowshed set designed by Max Dorey and moody lighting by Sally Ferguson that captures the both the horror of the pyres at night and the light falling through the shed.

And Then Come The Nightjars runs at Theatre 503 until 26 September and then heads to Bristol Old Vic. Another gem from Theatre 503 directed by Paul Robinson. 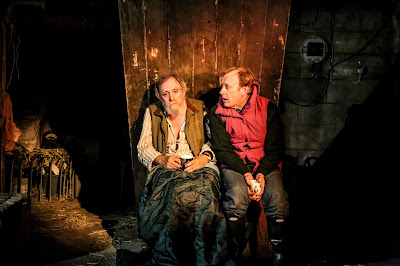