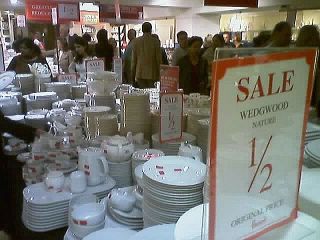 The last day of the Harrods sale brought all the punters out for an extra 20% off.

A wanted to get some more dinner plates, but not these ones after I suggested that they looked like you could get them at John Lewis. He settled for something much smarter. Later I bought a couple of shirts, so a sensible round of shopping was had by all.

It was actually the first time I set foot in Harrods, so A was keen to give me the grand tour (but I declined the offer to see the Dodi and Di memorial). While it is a tacky Egyptian bazaar with clothes, crockery, this and that piled up on top of each other in no real sense of logic or organisation, it still does have a certain charm about it...

Still as one sees the fading grandeur of the building and the cracked and dirty tiles in the food hall, it seems like there is a (very) small part of English shopping history that is slowly decaying away... And nobody really seems to notice as they snap up the Harrods bags and bears.