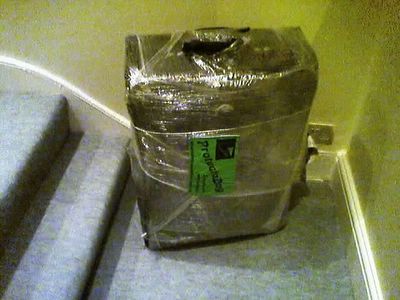 Scenes from various parts of London Thursday evening. I kept getting the strangest of looks on the tube home with my luggage covered in plastic wrap. It was if I was carrying Laura Palmer home. Cling-wrapping your luggage probably isn't as popular here as it is in Australia as Londoners don't know that loud mouthed drug smuggler from the Gold Coast otherwise known as Schapelle Corby. I got the "Schapelle Wrap" as I wasn't confident that the zips would contain the 30kg of stuff contained within, and I didn't want my Aussiebum pants flying all over the cargo hold, rather than over any concern about what baggage handlers in Brisbane would do with them (or stick in amongst them)...

Young Joan can't sleep. Was there a bump in the night? Or a scream? She is staying with her Aunt Harper, and she reassures her it's probably an owl. They seem to be in the English countryside. But with her aunt's responses becoming less and less convincing as she pauses and thinks about them, young Joan knows she has stumbled on something sinister about the world. And not just because aunty isn't a convincing liar or her armchair is filthy and worn. Thus begins the short descent into a dystopia where people are rounded up for inexplicable reasons, and you're never sure who is with you or against you. It’s currently playing at the Donmar Warehouse . It's a short descent as Caryl Churchill's piece runs only forty-five minutes. But in that time it's an unsettling enough to leave the audience nervously laughing. In the twenty years since its premiere, the fears of all controlling entities have only grown thanks to a vibrant network of social media, pseu
Read more...

A matter of laughs and death: Good Grief

Come inside and take a seat: Unfamiliar at home