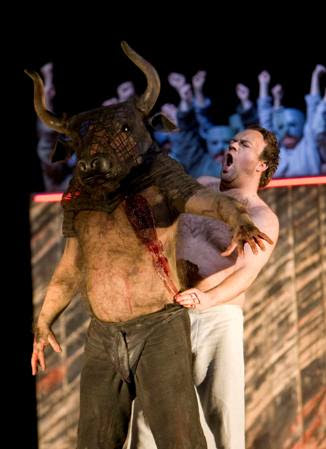 I caught the last night of the Harrison Birtwistles's new opera The Minotaur on Saturday at The Royal Opera. It is a thrilling and slightly disturbing opera (not to mention bloody too). Mind you, before the interval an elderly couple walked out. Maybe all that blood and rape and horror and gore was a bit too much for them. But that's new opera for you... At times I was wondering whether I was watching a high culture horror show (although I could have done with more blood and more realistic killings if that was the case).

The first appearance of the Minotaur (played by John Tomlinson) was a pretty dramatic moment and for nearly three hours the show didn't let up. Still, there is a lot to like about this opera starting with the music. The production design and the costumes - particularly the bulls head - were particularly creepy. The final battle sequence (depicted above) literally had everyone in my section on the edge of their seats (although that was party due to the fact we were in the cheap seats and had a partially obscured view). While the run has finished for now I suspect this isn't the last we have heard of this new work...

Titling a piece "Safe" at the moment evokes all sorts of meanings. Is it about going out in London? Is it about social distancing and testing? Is it about the latest vaccine? But don't one needs not have a pandemic.  Here, safe is about the basic need for young people to grow up in a safe and supportive environment. Particularly when they are discovering that they lesbian, gay, bi, trans or queer.  In this verbatim piece, writer Alexis Gregory weaves together a series of stories about the lives of young people and the fine line between being accepted and being on the street. The young people are trying to find their identity while their families, religion, race and class are forcing them to be categorised, classified and standardised into something else.  Taken from interviews with young people met through the Albert Kennedy Trust (AKT) with live music and additional words by poet Yrsa Daley it sets out how easy it can be to fall into poverty, abuse and addiction without
Read more...