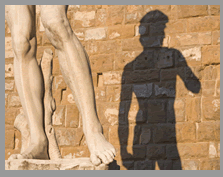 It always seems to be awfully warm when I head to the Finborough Theatre to see a show. Last year it was the excellent State Fair which is having another run at Trafalgar Studios. It was worth persevering with perspiration for that. This time around it was Peter Nichols's play Lingua Franca which alas, was not. This was a pity as the cast were great and there potentially was something interesting that could have emerged from the constant stream of monologues in search of a story.

When you have a good cast with some great actors featuring I always assumed you could put up with them reading a phonebook. In this case, maybe the White Pages would have been better. The story is set in a language school in Florence in the 1950s, which is the backdrop for a series of mildly interesting stock characters. There are no real surprises in the story, except when two of the characters embraced in some frottage-like behaviour in the first act. By the time the play reaches its climax involving a stabbing in the eye, it is too perplexing to work out what exactly was the point of that... Maybe I missed when I was too busy focussing on perspiring.

The Finborough was as hot as ever this week, and while there is an air conditioning appeal, during interval I took matters into my own hands and bought some Calippos to consume during the second act. Not only were they cold, but the sugar content was enough to keep me awake for the rest of the show. Welcome relief also came in the first act when one of the characters turned on a fan. We were horrified when Rula Lenska's character turned it off, five minutes before the play finished.

There were loads of theatre appreciation studios at the performance as well. They were equally bored with the show, but then again as they were watching three shows a week, they have probably seen a lot worse... At intermission Johnnyfox and I had a lot to say on the Audioboo. I think it was just because we were taking in all that fresh air... The show runs through to August. Wear light clothing and carry a big Calippo.