Theatre: On The Twentieth Century 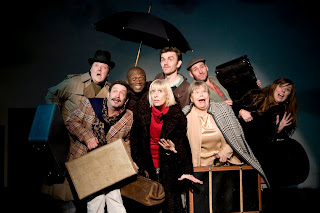 Tuesday night was an opportunity to catch the first preview of On The Twentieth Century at the Union Theatre. Cy Coleman's 1978 musical is set in the 1920s (or it could be the 1930s) where producer Oscar Jaffee is trying to score a hit again with his former leading lady, who has gone on to bigger success in the movies.

I had not previously seen this show, but over a pre-theatre fish and chips (or as they tend to call it in south London, fush and chups) at Masters Super Fish, Johnnyfox was waxing lyrical about how wonderfully rich and inventive the overture to the show was. So I felt his disappointment when the overture was arranged by musical director Oliver Jackson for a saxophone quartet and piano. It was still wonderful but not quite so rich. Actually throughout the show Johnnyfox was mostly singing along so I could sense it was going to be one of those evenings where I would be experiencing quite a lot of audience participation...

Anyway, this was the first preview and no doubt the performances will get better as the run progresses, but as a Twentieth Century virgin I had a great time. The performances of all the leads were great and I particularly liked Rebecca Vere as the star Lilly Garland. I last saw her in Batboy and comic timing and vocal range are perfectly suited for this role. She also looks great (although not that you can tell from the above cast photo). Valda Aviks also had a little star turn as the nut Letitia Primrose. It was particularly nice she singled out Webcowgirl as in need of repenting for a life in the cheap seats.

If there was one quibble it was that the staging of the show could have made more of the confined space of the Union Theatre, rather than spanning such a length that watching the show felt like being at a tennis match. But this still is a classy little show and an excellent little diversion over the Christmas period (particularly if you don't fancy seeing a panto).

Audioboos from the jaded and usual suspects are as follows: