Wednesday evening was an opportunity to catch Cirque du Soleil's new production, Totem at the Royal Albert Hall. Since Johnnyfox is touring South America and probably not into acrobatics of this sort, Gio came along. It was a perfectly grey and wet evening and before taking our seats we decided to savour the damp and watch as the celebrities arrived. Well for me, that was mostly asking Gio, "Who's Katherine Jenkins?" and "Who's that?" I am pretty lousing recognising celebrities... But for the record, Katherine Jenkins (left) did look lovely in that yellow dress... Once I was given the lowdown of who she was... 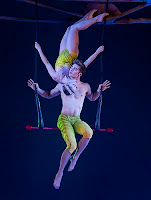 Anyway I have until now been a cirque virgin. Sure I had seen La Clique at the Hippodrome and Soap at Hammersmith Studios. But after watching Wednesday's performance that featured a number of sexy acts including the trapeze duo pictured above, I was ready for a cigarette. Cirque du Soleil is not the only show in town that present these acts nowadays. La Clique and Soap were edgier and rougher versions of many of the same acts. But Cirque du Soleil does everything bigger, with more spectacle, live music and some incredible costumes, and this show succeeds at doing this... Mostly...

Linking the show is the story of a journey from amphibians to human acrobats. I am not so sure what it says about evolution, but it sure does look good. Earlier this year I enjoyed writer director Robert Lepage's visually beautiful The Rake's Progress, and this production didn't disappoint either in looking stunning and taking routines and injecting an emotional story to them. The projections of water and fire work very well and amphibians morph into acrobats.

On the down side there are a few less successful scenes such as an overlong segment involving Darwin morphing into a juggler of light bulbs balls. There is also a runaway flamenco dancer who looked like she escaped from Zefferelli's production of Carmen at Verona

and was on the wrong set. The clowns did not hit the right note either with a surprising lack of comic timing in the second half. Perhaps the underwhelmed audience put them off, and it is probably never a good idea to pick on a cold fish in the front row to play off your comedy. One of them tried to make her laugh calling her beautiful but she was there obviously to be entertained rather than be part of the entertainment...

Still the businessmen on perches, the ladies on unicycles and the crystal ladies with the spinning tea-towels cloths all delivered incredibly thrilling performances. The downside to all these acts is that you expect it to be brilliant and overlook the degree of difficulty. I think we need some audience education with behind the scenes footage of the performers in the foyers amongst the merchandising stands. You don't get all that muscle and poise without an awful lot of practice...

The show runs until February 17 and is definitely the best looking thing playing in London right now.