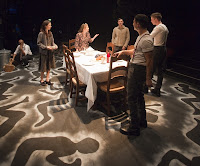 The message from Shalom Baby, currently running at the Theatre Royal Stratford East appears to be that no matter what the circumstances are, there is always a group of people out there that are beneath you. At a time when people are feeling less sympathetic for rioting chavs, travellers building illegally on green belt land, migration from Europe (or elsewhere) and Broken Britain, it is an interesting topic for reflection.

Shalom Baby is a love story initially set in 1930s Berlin. Events unfold as the daughter of a wealthy Jewish family falls in love with their black "Shabbles Goy", which is a term used to describe people who assist Jews on their Sabbath with tasks they are unable to do within Jewish Law. The play then moves forward to the present day where a mixed-race couple in modern and unprejudiced Brooklyn have to cope with a dysfunctional family unit.

Writer-director Rikki Beadle Blair originally became interested in exploring information about information about black survivors of the holocaust. But the scene is set for a much larger exploration of prejudice, sexuality, family and friendship using a variety of theatrical devices including some thought-provoking poetry. It all makes for a constantly intriguing and entertaining night at the theatre.

Helping to keep things in focus is an incredibly talented cast that make two wildly different families so believable. The story bounces back and forth between each family. And with the seating of the theatre rearranged to be either side of the proscenium, characters run in from the back, climb over the seating and fly (sometimes literally) onto the stage which also helps keep things at a brisk pace.

Depending on which side of the proscenium you sit also gives you a slightly different perspective of the theatre. Although I'm not sure being able to see the sign over the stage door reading "Work sets you free" would be everyone's cup of tea. But there is something creepy about being on the wrong side of the safety curtain. Interval boo reactions with @johnnyfoxlondon follow.

Shalom Baby runs until 19 November at the Theatre Royal Stratford East. Catch it if you can.