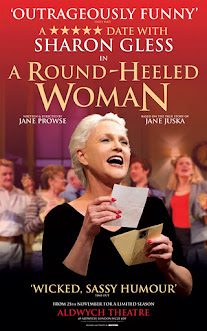 A Round-Heeled Woman has just transferred from the Riverside Studios to the Aldwych Theatre. It is an opportunity for Sharon Gless (of Cagney and Lacey fame) to portray through part monologue / part drama the true story of Jane Juska. Juska is a woman who placed an advertisement in the The New York Review of Books that read: "Before I turn 67 – next March – I would like to have a lot of sex with a man I like. If you want to talk first, Trollope works for me."
The play, which is based upon Juska's book, goes through some of the encounters that lead to love, heartbreak, rejection and laughs. The audience on Friday night was not prepared for the humiliation arising from this situation. There were audible gasps when one of her male suitors tells her why she needs to get some lubricant.
But the sharp wit and brutal incisiveness is frequently undermined by a superfluous supporting cast that have little to do, and a set so distracting that it has your mind wondering to ask questions such as, "Why does Juska have a tomb in her front garden?" Maybe it is meant to be a metaphor. But perhaps cutting back on both would enable more time to focus on the central character.
Still, Gless gives a pretty good performance and it is an enjoyable night. But perhaps the target audience is for those whose last outing was to see Menopause The Musical, although there were plenty of fans from Gless's Cagney and Lacey and Queer As Folk days in the audience... It runs until January. Incidentally Tyne Daly is appearing January in Masterclass... Maybe the two productions should have a mash-up?