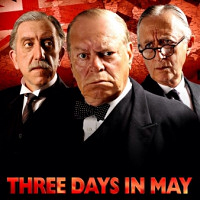 Three Days In May, is about the period shortly after Churchill becomes Prime Minister in 1940 and when Britain contemplated whether throwing in the towel and negotiating peace with a stronger, more powerful Germany was an option. It is currently playing to healthy audiences at the Trafalgar Studios. An early surrender seems today to be an unthinkable prospect. But at the time France was powerless to stop the German invasion and worried that without surrendering they would be annhilated. The British were outnumbered and feared suffering a humiliating defeat at Dunkirk. The play therefore unfolds with this context and debate.

There is nothing like a bit of Churchill to get people standing to attention nowadays and reflect upon glories past. Or at least perceived glories past. As the play notes, Churchill commented that he expected history to be kind to him as he intended to write it. So it is a shame that the play doesn't attempt to throw more grey on a dark period in the country's history. Instead we have what is essentially a radio play and half a history lesson gleamed from wikipedia without too much characterisation.

The production relies on the audience having lived through the war to know its context. And judging by the average age of the audience on Saturday night they might have got it right. But it might have been more helpful to inject a bit more context via newsreels and footage of the day rather than bland projections and a map as a backdrop. It might have given the story a greater sense of urgency and drama. Also, while Churchill's secretary may have provided for the source material, he does not make a compelling character. And as a narrator he kills the drama.

Still, what makes the play a stand out is the performances. The actors manage to polish the material and give it a subtlety and at times sophistication that makes it worthy of a night out. Warren Clarke as Winston Churchill delivers an engaging performance. While he may not be channeling the man with his cane, bowler hat and cigar, you get a sense of a man with an understanding of history weighed down by his own experiences and age. Robert Demeger manages to give a more sympathetic portrait of Neville Chamberlain than most history books will record. At this point in history Chamberlain was still largely respected and not been written off as an appeaser and Churchill was not respected amongst his peers. It is how Churchill plays upon Chamberlain's regret for negotiating with Hitler in Munich in 1938 that gives the play its most dramatic fire.

The play is proving too tempting for journalists to draw parallels to the current loss of British military power. Perhaps a more relevant parallel (and less rabid) is one that highlights how intertwined the island is to the continent... Whether it likes it or not... Catch it and contemplate... Good seats available (for now) at the usual discount venues.