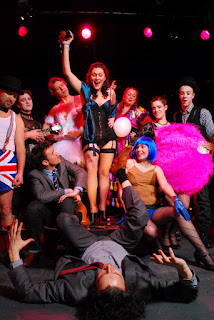 La Traviata which is playing Upstairs at the Gatehouse is a surprising treat. One of the most loved and most performed operas with its beautiful music and fully developed characters, in the Gatehouse's intimate space becomes an intensely emotional affair that has the audience alternating between sobbing and cheering.

This is the same company that presented the economic production of Troy Boy last year. Again by Kit Hesketh-Harvey, this new translation and adaptation moves the action into the heart of cosmopolitan East London. Well the part where there are dodgy burlesque clubs and marriages that still need to preserve reputations.

Moving and updating the actions opens up a whole range of  possibilities. Sempre Libera now includes a lap dance on one lucky audience member. Since Anna Jeruc-Kopec who plays Violetta has a great set of legs to match her set of lungs, it came as no surprise when she started to get a good mauling by the audience... They can be funny like that in Highgate.


In addition to Jeruc-Kopec,  the cast includes the usual insanely talented young singers. Some have won prizes and others have worked for various other opera companies. Part of the fun going to these productions is spotting who might be a potential star. Time will no doubt tell.


In this modern adaptation, I was surprised she didn't leave Alfredo (or Al as he is here) by changing her Facebook relationship status and checking back into the La Traviata club on Foursquare, but minor anachronisms aside, the piece can stand on its own while preserving all that is great about Verdi's music.

The staging is kept simple and so the piece relies on the passion and performances of this young and energetic cast right in front of you to hit the spot. And they do.

Following the run at Highgate, it is touring Southern England before returning to London at The Scoop in June. Well worth a trip on the Northern Line to the pub on the hill. Don't miss it. It runs through to March.