Theatre: The King's Speech (in Richmond) 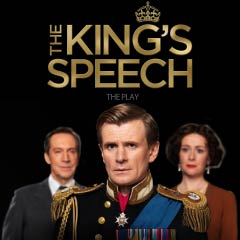 The King's Speech was originally intended to be a play rather than a film, and it you now have the opportunity in London to see it that way. It is a smart looking production with an excellent cast that keep things in focus. The performances by Charles Edwards as the King and Jonathan Hyde as Lionel Logue are central to this and you are on the edge of your seat whenever they are on stage.

Despite projections and visuals which make the piece still feel a bit cinematic, it is the dialogue and the banter between the two men that are key. On one level, the play elaborates and enhances some aspects of the story going beyond what the film covers. But on another level it is also labours them.

The film seemed sharper and more credible. It is a pity that perhaps the stage version didn't re-imagine the story as a three-hander between George VI, Elizabeth and Lionel Logue. The focus of the stories blurs with the cast of supporting (and possibly) superfluous characters.Winston Churchill, the Archbishop of Canterbury and Stanley Baldwin seem to be a comic chorus to the proceedings. Walace and Edward come across as the usual Nazi sympathisers. Nothing is particularly subtle here, and various lines managed to elicit "ooh yes" from the mostly elderly audience...

It isn't Chekov but still it is all a bit of fun and an interesting footnote on historical events. It's currently playing at the Richmond Theatre and will move to London's Wyndham's Theatre later this month, where the revolve will no doubt be built into the stage, rather than giving the impression people are acting on a cliff.