The LondonNewcastle Project Space in Redchurch Street is home to a fabulously frothy and deliciously naughty exhibition of photographer Gerard Rancinan's work called Wonderful World. Rancinan is known for his dynamic and hyper-realistic pieces. Production of one of the pieces on exhibition is depicted in the video clip from French television. It is painstaking and eye-catching work, particularly with half naked models (even if they are wearing cartoon masks and put into positions that echo religious iconography).

Wonderful World is the concluding part of his Trilogy of the Moderns. The everyday meets the kinky, pop culture meets street culture and religious icons meet cartoon icons in a series of images that explore the search for happiness (real or drug induced) in a confused and odd sort of world. So naturally it all suits the Shoreditch area well.

Beautifully presented with fifteen large images surrounded by props, costumes and other features, it is a lot of fun and takes a few good barbs at crap art and celebrity obsessed culture. The exhibition also includes a purpose built set that will serve as the vehicle for the public casting, shooting and unveiling of the final composition in this series on site. 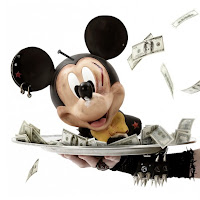 Visitors to the gallery this weekend (9-10 June) will also find themselves auditioning for the casting call. If you have what it takes to make the final tableau you will be initially photographed mug shot style. If you're make it through then the shooting will take place on Tuesday in the gallery. Repeat visits over this month are recommended to savour this part art installation, part film set, part soap opera, part photoshop masterclass...

Work will continue on site through to the unveiling of the finished work at a reception on Wednesday 20th June. Go see it. Get photographed and be fabulously happy, regardless of what chemically enhanced state you may be in. Just don't tell Minnie what they do to Mickey...