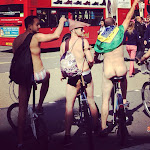 Of course, the event is so large nowadays that it is still possible for some cyclists to get caught amongst the traffic. Being naked in Piccadilly Circus with hoards of people and traffic around you surely must count as the stuff of worst nightmares, although these Brazilians didn't seem to mind that much...

It may not be art but it is one of the more creative forms of protest to be seen on the streets of London. For those of you that like cycling (and full frontal nudity) there are more photos here...