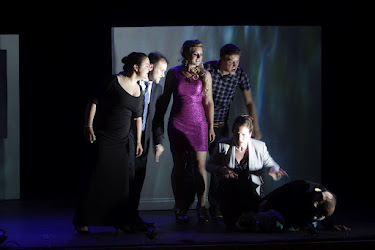 In a week when Prince Harry's buttocks and a rowdy party were the topic of discussion, the opportunity to see young opera performers in an English modernisation of Don Giovanni cavort and brag about conquests seemed rather relevant. This Don Giovanni may not be royalty but he is a bit of a lad and the women he seeks look like they could be found at a Vegas pool party. It is probably a little too faithful to the Mozart's original which does tend to be confusing, but things move along at a pace you find yourself not minding it too much.

Helping things is the energy and enthusiasm coming from the cast of young opera singers. The Co-Opera Company is made up of members and associate members who wish to pass on their expertise to the next generation of performers. The company exists to provide aspiring artists a start in their career on stage, in the orchestra or behind the scenes. They are into their fourth season and they manage to do with no outside funding.

While perhaps after a long week of workshops and training the performances did tire a few of them by Friday evening's performance, there was still much to admire in both the performances and the philosophy behind the company. And it is great to see yet another outlet for young singers to develop their skills.

This minimalistic and stylish production generally worked although there were a few odd moments such as a food fight towards the end that seemed out of place in such a smart-looking show. Still things were brought back into focus for the finale where the voices, music and production came together rather well and highlighted some fine music-making.

The Co-Opera Company is about to set out on a UK tour in September starting at the Grand Theatre in Wolverhampton. Don Giovanni is one of three productions that are part of the tour, with the others being Hansel and Gretel and The Magic Flute. Check local papers or view more details on their website.