Last chance (for now): The Mystery of Charles Dickens 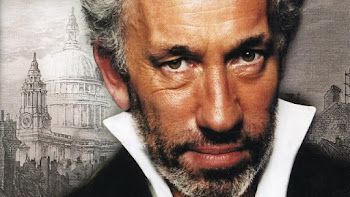 The Mystery of Charles Dickens is finishing its run at the Playhouse on 10 November and worth a look if you don't mind watching Simon Callow on stage for a couple of hours. He is great to watch as he has such a marvellous speaking voice. It isn't so much a mystery but a good story telling that takes place as he runs through some rather dramatic points in Dickens's life, interwoven with recreations his readings of his stories, which you learn were quite a sensation.

This show was first staged in 2000, but has come back for another revival timed to commemorate the 200th anniversary year of Dickens's birth. It is a simple concept with Callow on stage as part teacher, instructor and performer. Written by Peter Ackroyd, who knows a thing or two about London (and Charles Dickens), he manages to distil the interesting aspects of his life and this production keeps things moving at such a brisk pace you can be forgiven for forgetting how many years, books and wives have passed by during the two 50-minute halves of the show.

Anyone familiar with the life and times of Charles Dickens may not find anything new here, but what works best here is the ability to recreate the period he lived in and see it from this perspective.

Good discounts are available at the usual outlets...