Disorder in the house: This House 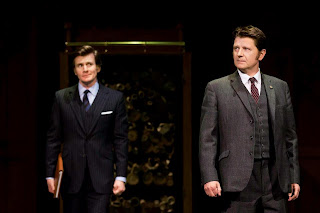 This House by James Graham, back for return season at The National Theatre, is a political drama (and comedy) that manages to capture the excitement and the insanity of its time. It covers the period between 1974 to 1979 which was the last time there was a minority government running the country. With a wafer-thin majority the government was not expected to survive and it was the role of the whips, who enforce party unity in voting, to ensure its survival or bring it down.

While it is full of some of the spectacle set pieces of the time such as a near riot in the Commons and Big Ben breaking down, what is more remarkable is how it sheds some light on the relationships that developed in the period both within the parties and across party lines. It is part epic drama with a booming soundtrack supplied by a supporting band, and part series of small scale personal dramas from people passionate about something.
You don't really get to know what that something the characters are passionate about. It is either assumed knowledge or perhaps irrelevant to the play and its characters. Although by doing so it's tempting to root for the government whips forgetting that they were trying to get the numbers to nationalise vast swathes of industries and bring the country to its knees. On the other side, there is only a brief reference to the need for a new free market way that new lady would bring. But the inherent conflict that comes with a Parliamentary system makes for fun, exciting drama, even if it is wallowing in everything that is wrong and out of date with the system.

While there is a fine (and large) ensemble cast, key to the drama are the roles played by Charles Edwards and Reece Dinsdale as the deputy whips from each party. They are great parts which highlight the farcical nature of the times, class differences and a level of respect for each other. They keep channels of communication open, while everything else around them is chaotic.

For the most part the play avoids sentimentality and obvious references to the future (although there is probably not much to be compared with the current minority government). It is a fascinating work that weaves together facts with anecdotes and dramatisations. It is up for several Oliver Nominations and it is easy to see the appeal. And despite the subject matter it is a surprisingly intelligent and entertaining evening at the theatre. It will be part of the National Theatre Live season later this year as well. Worth a look.