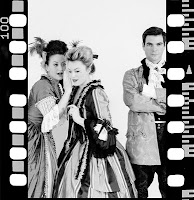 Cheap laughs and scandal never seemed so sexy and witty than in Turn of the Wheel's School for Scandal, which has been playing at the Waterloo East Theatre, transforming the theatre under the arches at Waterloo East station into a hotbed of gossip.

Eighteenth century London socialites don't seem too different from modern day slebs with their acid tongues and bitchy banter, although is mostly undertaken in drawing rooms rather than on social media (or blogs for that matter).  The essential premise is that when wealthy Sir Oliver (played by Gately Freeman) returns from the East Indies he decides to select one of his nephews as his heir, but unsuspectingly gets dragged into various plots and sub-plots over lovers, scandals, unrequited love.

The subject matter of gossip, scandal and intrigue are given a boost by the young cast. It is delivered with such energy and enthusiasm that the barbs fly fast and it is easy to miss some of the lines if you're too busy laughing. Pip Gladwin as the lecherous Snake, Alicia Bennett as the very perky Mrs Candour and James Taylor Thomas as Sir Benjamin Backbite are among the talented supporting cast. Tabitha Becker-Kahn as Lady Teazle, also gives an intensely funny performance as a woman who marries above her station, yet is linked by gossip and other means to the two nephews.

The set and costumes also give the production a high quality feel for a fringe show (even if the stage was a little noisy at times from all the romping about by the actors).

This is the second production from Turn of the Wheel Productions, a new company that launched in January 2013. Their debut show Oscar Wilde's Lady Windermere's Fan, directed by Adam Morley.  The company aims to deliver theatre that provokes and entertains across a variety of forms and genres. I look forward to seeing their future productions.

The run concludes this weekend, and if you are keen to see the play rather than some modern day equivalent currently on the television, there will be another opportunity when the Park Theatre production is staged later this summer.