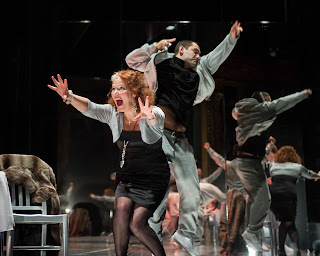 It is a hard hitting foul-mouthed in your face night at the theatre watching Gutted, Ricky Beadle-Blair's new play at the Theatre Royal Stratford East. Set in Bermondsey, South East London, it tells the story of the Prospect family and the dark secrets that drive them. It is a place where grey tracksuits and white trainers are the clothing of choice. And football, violence, petty crimes and the frequent utterances of the word "cunt" abound. At times it is exhausting to watch (and listen to). The end result is shocking at times and probably not the sort of play you would take your mother to (unless she is from South London). But it still makes for a great night of theatre.

The story focuses on four south London brothers, their relationships with each other, their girlfriends and their hard-as-nails Irish mother. When their father was alive, he subjected the eldest son, Matthew, to abuse. Their mother knew what was going on but ignored it. Matthew is good enough at football to get signed for Millwall, but he rarely makes it out of the reserve team. After a breakdown he returns home and decides he is going to confront his past. The second brother is a family man but there are other threats to his family that he misses. The third brother hast a short fuse and prefers the company of a specific type of lady while the youngest still is bitter about the time he served in an young offenders institution so that his brothers escaped penalty. 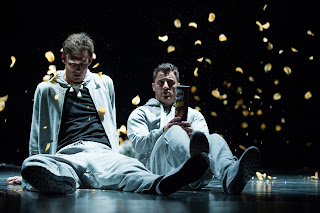 With this much drama, there is plenty going on to make for a fascinating evening. Notwithstanding the subject matter, Beadle-Blair has affection for his characters and there are frequent touches of humour and sympathy amongst the violence and shocks, which come as necessary relief (even if it is nervous laughs from the audience). The characters likable, but it does put everything in context. I suspect part of the gasping from the audience at times reflects how you are innocently drawn into a nightmare world where shocking actions don't seem to be that big of a deal.

The question the play asks which comes together in the final scenes is whether everything that has happened before, will happen again. The characters suggest perhaps that is not the case and that the victims of past abuse need not be the future perpetrators. And with awareness of what happened in the past, there is hope for the future.

For such an intense drama the performances are particularly engaging. All the actors have difficult scenes to play and manage yet create this intense, moving and sometimes funny world. It is a simple yet effective staging with a few chairs, mirrors and props. This enables things to focus on the performances and allow the audiences to imagine the neighbourhood and its violence, which perhaps makes things more shocking than they are on page.

A night of theatre that you won't forget too soon. The show continues at Theatre Royal Stratford East to Saturday 25 May. Good seats should be available for most performances and check out the resources on the theatre's website for more details on the show.