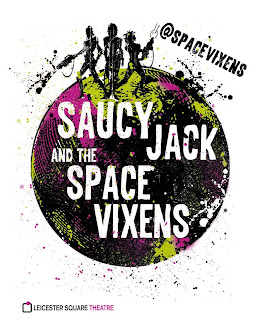 Leaving the theatre singing to oneself, "glitter shoes, saved my life," I was struck how rare it is to see a new show and keep the music and lyrics in your head. But with Saucy Jack and the Space Vixens downstairs in the bowels Lounge of the Leicester Square Theatre, the song and line is repeated so often it was bound to become an ear worm. It was also plastered on the merchandising strategically placed near the exit.

From what I could understand of the plot it revolves around a sleazy cabaret club called Saucy Jacks on the notorious planet Frottage 3, where the performers become victims of a serial killer, who kills using a red slingback. With all this murder going on the club is visited by the Space Vixens who are like an interstellar Charlie's Angels who fight crime with the power of disco...
While it purports to be a cult show in the making, it is probably unfair to compare it to the Rocky Horror Show. It lacks the sexiness and feels more like an adults only revue with a mix of musical and disco songs. While there are some catchy tunes there is not much of a story (or suspense) and it most of the lyrics and characters are crude plays on bodily functions or sex positions. Nor is it particularly clear what sort of interstellar pansexual dystopia we are part of... A couple have a cling wrap fetish, there is a hot lesbian biker couple and straight character with a big saxophone... If that is your cup of tea it all makes for an overlong and none-too-subtle evening.

While the young cast work hard to keep things bright and buzzing, they also seem a little miscast. The  space vixens come across best and have the best looking outfits. Jamie Birkett as lead vixen Jubilee Climax, has the vocals and stature for the silly material. Some of the others seem to struggle with the material and the low production values often make it difficult to hear them over the sound system and backing track.

The economy of the show also extends to the venue. It is a pity the theatre only had one working air conditioning unit a lack of air and claustrophobia don't particularly add anything to the production. But there is a bar which assists with the enjoyment of the show... Grab a drink, lower your expectations and head for the disco... It's all a bit of fun... But with the emphasis on bit... Saucy Jack and the Space Vixens runs until 15 September at the Leicester Square Theatre... It also appears to be touring anywhere and everywhere...