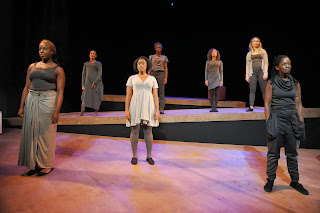 Crowning Glory which is now playing at the Theatre Royal Stratford East is a frank, sassy, funny and thought-provoking piece which apart from being about hair and makeup, is full of insightful observations about life - particularly the lives of black British women - and some raw emotions. The piece is told through the eyes of seven women and features a series of interwoven monologues, video projections and music asking about what is beauty, what makes people happy and in doing so also reveals their vulnerabilities and fears.

It's a piece that tackles beauty and perception with a call to action at the end. As the character "panther" tells the audience, she came to the beauty shop for coco butter, and she will leave the shop with just coco butter… The audience cheers and you feel such an infinity for the character in trying to redress some long-standing gender imbalances that if the local Boots was still open after the show you might be fired up enough to want to argue with the manager about their product stocking policies.

The women present themselves as a chorus declaring that it is a white girl's world, and for the next ninety minutes each of them go into the detail about why this is so. The cast represent a series of different characters. There is a mixed race girl, a token white girl, the girl with the big mouth and so forth. They talk about their mothers, their big mouths, their non-communicative husbands. There is even a well-meaning liberal white woman who just won't shut up.

What could be just a series of readings is really brought to life with some terrific performances, some sharp staging and projections which cut to vox pops and other characters. While perhaps a couple of the monologues could have been a little shorter, the perspective, insight and emotions are so fresh, funny and raw it is hard to not be engaged in the piece, even after a long day at the office and lack of sleep the night before...

In the notes for the piece, playwright Somalia Seaton notes that she wanted to write a play that raises questions about how beauty is perceived and who sets these ideals. In doing so she manages to uncover some raw emotions and some very funny insights that had the audience hooked and on their feet at the end.

Crowning Glory started as part of Stratford East's rehearsed readings, Angelic Tales last year and is great to see such a well crafted piece emerging from it into a smart and slick production.

Crowning Glory will run at the Theatre Royal Stratford East until Saturday 9 November. Go see it while you can. There are two post show discussions next Tuesday 29 October and the following Tuesday on 5 November.