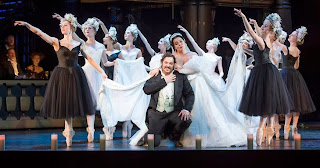 It is a spectacular and grand evening at the opera with the current production of Les Vêpres siciliennes. I caught the sixth ever performance of this production at the Royal Opera (which is also being broadcast around the world at cinemas). While it helps to understand the historical context of the thirteenth century French occupation of Sicily, even more important is understanding a grand opera, its characteristics and excesses. Once you accept all this, it is a hell of a night.

The production manages to pare back some of the spectacle in favour of focusing the story on four principals and a story of betrayal and family secrets is brought to the fore. The production is more a commentary on grand opera traditions, but works. Verdi's music with the Orchestra of the Royal Opera House and conductor Antonio Pappano is so stirring and rousing its tempting to want to join the revolutionaries.

There are two more nights for it to run and a handful of tickets are available. Don't miss this memorable marking of Verdi's bicentenary. Check listings for cinema screenings as well.