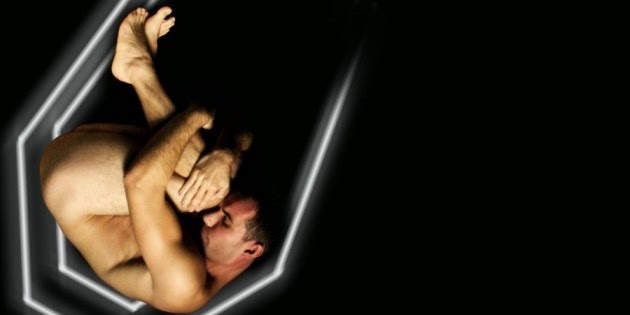 Here Lies Henry which concludes its brief run at the Camden People's Theatre on Saturday, reinforces all the stereotypes that gay men who live near Finsbury Park are just bad news, but they sure can dance.

We are introduced to Henry (played by Matthew Hyde) who appears in a dazzling bright light. He is a bit on edge, he is twitchy and he has a spare room for rent in Finsbury Park. And there is a body in the room. Or is there?

Henry is in his thirties and is a compulsive liar, optimist, potential drug addict and mildly romantic guy trying to make sense of his life.
The audience is left to piece together a series of flippant (and no so flippant) statements over the course of 70 minute monologue. It's called an experimental piece but what is more striking about it is the way Henry just talks to the audience, as though he has just been out for the last three days. It is as if you are trying to listen to someone in Vauxhall Tuesday morning who hasn't been home since Friday explaining what they have been doing.


Audience engagement may be critical, but at the performance I saw some fell asleep. Even the best actors are going to have a tough time trying to get a response from someone with the mouth half open  and eyes shut. And if those around you are nodding off, you are not going to feel the urge to laugh.

But perhaps the material is showing its age. Written in the 1990s, the piece takes you back to a period when bitchy quips were the norm, but if you are not familiar with the party scene, the high drama and the occasional violence you may find it all a foreign strange world. There is a murder, some lies and Henry, but apart from being a terrific dancer, he isn't much of an interesting character. And no amount of slick lighting effects, clever projections and a strong central performance can hide that.

Daniel MacIvor's play reportedly has developed a cult following but even staying wide awake throughout I cannot say why. Perhaps you need an audience that hasn't seen it all before to appreciate it.

The references to a body in a flat in Finsbury Park had me recalling a visit many years ago to a prospective flat share in a basement property. The interior design consisted of pink lighting and cast off advertisements from Chanel perfume. While the piece probably merely intends to evoke hell in north London, I felt like I had been there...

Photo credit: production photo. There is no actual nudity in the play although potential soul baring.