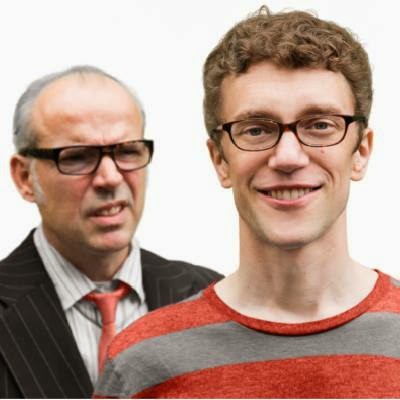 Father-son comedies have never quite felt so weird as they do in Wingman, Richard Marsh's new take on strained and odd family relationships having an early slot at the Soho Theatre this month.

Marsh, a writer of Fringe First winning Dirty Great Love Story and Radio 4 show Love & Sweets, has crafted a story that is part dialogue and part poetry that has a surreal comic effect in describing his dysfunctional relationship with his dad (played by Jerome Wright).

Mum has died but after twenty years apart they reunite at her graveside. And it is an opportunity for dad to reunite with the son he left twenty years ago. And dad suggests after seeing that his son is struggling with women that perhaps they could socialise together and he could be his wingman. But that means the son has to get over his issues of abandonment and general hatred of the man...


While you may struggle to believe the family dynamic, and perhaps the poetry gets in the way, you can't help but admire a piece with a unique voice that effortlessly moves between comedy and high emotion.

Wingman plays until late September at the Soho Theatre and a tour is in the works. Worth a look and details on the tour at on Marsh's website.