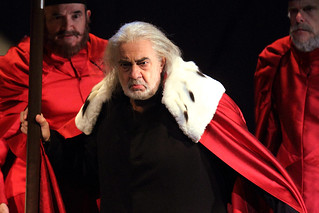 The star power was shared with Francesco Meli as his condemned son Jacopo, and Maria Agresta as Jacopo's wife.

There was plenty of passion in their voices and some sublime subtle harmonies with the three principals together.

A night to remember for the performances and the fine music making, even if the opera is probably an acquired taste.

It runs for five more performances up to 2 November. Tickets are currently available.