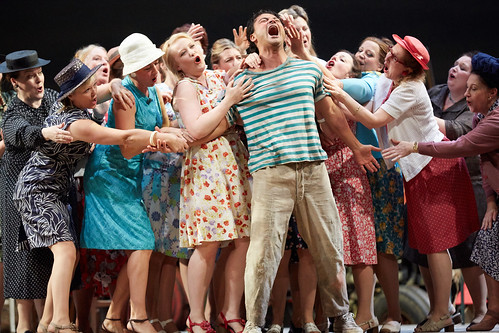 Two star performances by Vittorio Grigolo and Bryn Terfel make this current production of L'elisir d'amore at the Royal Opera so exciting and damn funny.

Grigolo bounces around the stage with such energy, enthusiasm and vocal power that makes this production a real treat.

His Nemorino, the naive village boy besotted with farm owner Adina, really conveys the hope and longing (and the touch of silliness) that this piece requires.

Adina, played by Lucy Crowe has a lovely vocal tone and can act too. Perhaps she seems to nice to ever be so cruel to reject Grigolo's boisterous advances.

Bryn Terfel as the quack doctor Dulcamara who offers a love potion to Nemorino to help win Adina's heart has a great voice but perhaps not the first person to think of for this comic role. He seemed tentative on Tuesday in his opening moments. But by the second half he was deftly handling both the comedy and the music and looked like he was having a hell of time.

An irresistible treat that had the audience laughing and cheering throughout.

Performances run until 13 December and the production will also be filmed and screened live on 26 November as part of the live cinema season.  Catch it if you can.