Boots and all: Man to Man @ParkTheatre 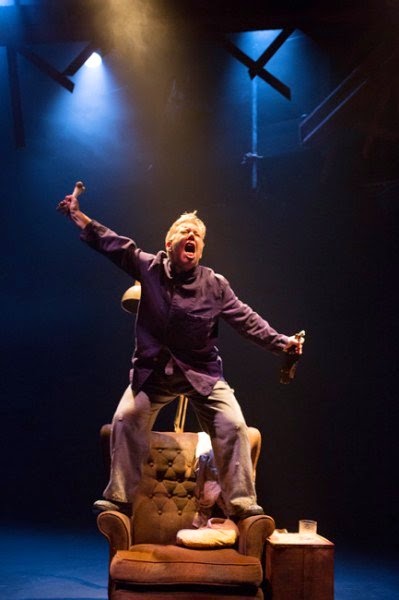 Man to Man, which concluded its run at the Park Theatre Sunday allowed for Tricia Kelly to inhabit a character that is filled with desperation for survival.

The hardship comes after a series of calamitous events. The first after losing her husband (and source of income) to cancer, then to survive war time Germany and again in the post-war socialist order of East Germany.

Kelly moves about the stage, drinking, screaming, throwing dirt and all the time evoking the tumultuous period with a wry sense of ingenuity and a little bit of humour. It must be a hell of a part to play and to watch her perform is fascinating and evocative.
The work explores what it is like to survive in harsh circumstances. What is fascinating is how the challenges for each period, while unique, are also pretty grim. And against the historical backdrop emerges a resourceful character and a story of survival.

This piece has been rarely performed in the UK with its last performance in 1988 giving Tilda Swinton her big break. This time around the version also includes a new section that updates the story in the light of the fall of the Berlin Wall and German reunification.

It ends with her with a boot on one foot and a woman shoe on the other. A fitting visual image for a work about a person with a foot in both camps.

Perhaps it will again be seen soon (or elsewhere). Presented by Danielle Tarento following a sell-out run at the Mercury Theatre, Colchester. Directed by Tilly Branson.