Holographs of my mind: Dusty @dusty_show 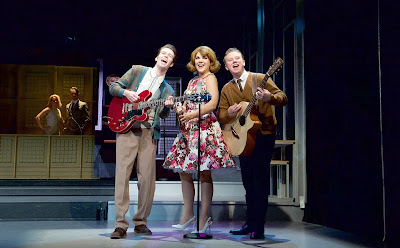 Dusty Springfield is back from the dead in Dusty, a multimedia musical which has her spinning around and singing in 3D holographic spectacular. As for the show, despite other opinions, I liked it for the music. It is a wonderful homage to her, even if the technology gets in the way of the performances and the story.


Anyone watching this show and unfamiliar with Springfield’s life and music could be forgiven for thinking she was just an act from the 1960s. The show ends around the Dusty in Memphis period, which was her now seminal album recorded in Memphis but only a minor hit when it was first released. Her career continued up to her early death in 1999, along the way it was peppered with lesbian affairs, alcoholism and struggles.

The inclusion of “Son of a Preacher Man” was included in the Pulp Fiction soundtrack, saw her return to fame before her death in 1999 at the age of sixty. Alas none of this is covered in the story.

Instead there is the intriguing technical achievement of combining footage and holographic effects of the real Dusty, singing along to live music with backing performers.

The decision to combine Springfield’s studio recordings with live vocals is going to make for a challenging evening for anyone playing her. Alison Arnopp as Dusty has the unenviable task of being compared to the throaty singer. She performs capably but has a thankless task of sounding like her and providing the drama links.

Francesca Jackson as the friend Nancy comes off a bit better as she gets to sing a complete song. Her vocals also sound more like Springfield, particularly when she hits the low notes.

Witney White is a revelation as Martha Reeves and gives the show  an injection of soul and some funky moves.

Actually all the performers show off a lot more moves than Springfield and at least they have that over her. Going by the footage she was not one for fancy footwork other than sticking a leg out or raising a hand up in the air.

All told if the West End has a Sinatra tribute show and and Jackson tribute show, it surely should have a Dusty show. Although it might be a better show by just focusing on the music (and maybe the occasional video-hologram-spectacular).