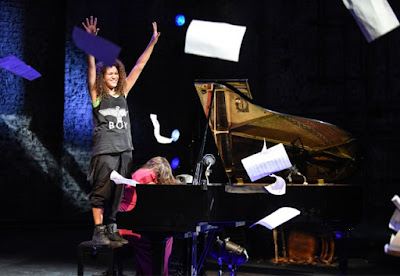 A reunion with an estranged half-sister at their mother's funeral provides the backdrop for an unlikely musical subject in the Etienne Sisters at the Theatre Royal Stratford East. The sisters accompanied by jazz pianist Nikki Yeoh perform admirably in this sophisticated and slick show even if the music doesn't feel like a perfect match to its subject matter.
Written and directed by Chè Walker, with songs by Anoushka Lucas and additional songs by Sheila Atim, the premise is that Tree, Ree and their estranged half-sister Bo are reunited at their mothers funeral. She decides to move in to comfort her sisters but tensions and resentments from the past begin to surface.

The jazz soundtrack by Anoushka Lucas is effective at times in setting the scene, but less so in driving the story forward. And when you would expect the music to drive forward heightened emotions, instead we just get narration from the characters.

The creative decision to use jazz does not always gel with the characters. There is a grittiness in Bo's character that seems to be crying out for something musically rougher and stronger, even if Allyson Ava-Brown makes sure that she is a memorable character with her larger-than-life portrayal.

As Ree and Tree, Jennifer Saayeng and Nina Toussaint-White have great vocals and presence and can also hold their own with the complex solos and harmonies.

The piece was workshopped at Theatre Royal Stratford East in September 2014 and is having its world premiere here now. It has been given a slick treatment here with giant projections and minimalist staging. It looks and sounds great. But perhaps the sum isn't greater than all the respective parts of it... For now...

The production runs through to the 3 October. On Tuesday 29 September there is a free post-show discussion with the cast and creative team.