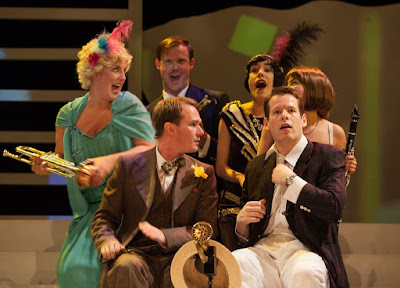 It’s the jazz age and there is plenty of period music, and lively performances in this spirited and youthful adaptation of The Great Gatsby by Blackeyed Theatre.

In this adaptation by Stephen Sharkey, which was commissioned to mark the 90th anniversary of the novel’s publication, live music is combined with F. Scott Fitzgerald’s writing to give a period flavour to the evening. 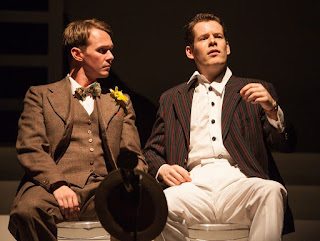 Gatsby (played by Max Roll) is young, carefree and can play a mean clarinet. He is surrounded by  other young but careless people who are determined to have a good time while playing musical instruments as well.

But the star of the show has to be Adam Jowett, who as Nick Carraway, narrates the piece with alternating between youthful vigor and general indifference about the circle of friends and the opulent lifestyle that surrounds them. By the end of the piece you feel like you have been on a journey with him.

Of course you have to imagine the opulent surroundings. The production, which resourceful is also quite minimalist. Seeing it in the cavernous space of the Greenwich Theatre also meant that you really had to use your imagination to picture the grandeur of it all. But no doubt other more intimate venues the show is touring to will serve it better.

This production is on a tour across the UK including dates in Portsmouth, Worthing, Kirkcaldy, Basildon, Wolverhampton, Newark and Cambridge through to March 2016.

An impressive show from Blackened Theatre, which since being founded in 2004 has produced 14 touring productions. It is based in Bracknell, Berkshire. Check their website for touring dates and more details.