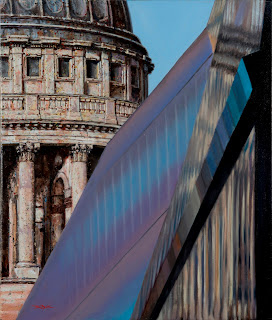 Opening this week at the Royal Opera Arcade off Pall mall is Hugh Beattie's exhibition called London: Ancient and Modern.

The exhibition brings together 30 new paintings by artist Hugh Beattie depicting views of London’s skyline which we do not normally see.  The works contrast the heritage of London and the new architecture of glass.

Over 70% of the City of London’s buildings have been erected since the millennium. In Beattie’s canvases, Early Medieval buildings share the cityscape with towering Modernist flats. 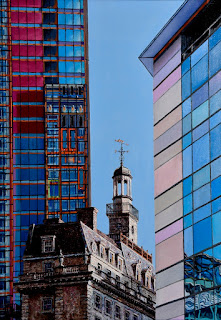 Hugh Beattie trained at Chelsea and Camberwell art college. He has also travelled to Florence to learn to paint in the style of Titian and S Sargent. Having previously painted Rome and Venice, Beattie has been drawn back to London focusing on executing studies of London cityscapes in oil.

The exhibition runs at the Royal Opera Arcade gallery through to Saturday 5 December and is open from 11am-6pm. Admission is free.