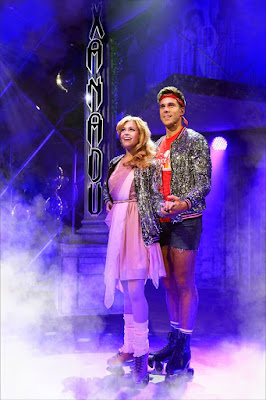 Xanadu, currently playing at the Southwark Playhouse takes the format of musical based on a movie and sends it up mercilessly, but the high energy levels and sheer enthusiasm from this cast make it more than just a cheap show.

Usually musicals based on a movie (or a jukebox) have source material that was loved or respected. Xanadu did not have that. It seemed to be a showcase Olivia Newton-John's limited acting (and dancing) abilities. The occasional cheap effect could not conceal that looked as if it was staged in a supermarket. And shot mostly at eye level meant that none of the dance sequences could really be seen anyway.

Over the years it developed a cult following among those who appreciated it for being "so bad it is actually good”. It was also Gene Kelly’s final film so how bad could it really be?


Well, the plot involves Kira, the magical (and beautiful) Greek muse, who descends from Mount Olympus to Venice Beach California to inspire a struggling (and stupid) artist Sonny, to open a roller disco.

Set to songs by Jeff Lynne (of Electric Light Orchestra) and John Farrar (Olivia Newton John’s producer and frequent songwriter) this is a quintessentially 1980s sound. The film may have been a flop, but the soundtrack gave it a life beyond its limited means.

For the musical adaptation additional songs from the ELO and Farrar catalogue are added. The book by Douglas Carter Beane, actually improves the story by not taking itself very seriously sending up the original film and also expanding on the role of the Greek muses. Ultimately the over the top silliness of the material is lifted by the sheer energy, hard work and clever comic performances from the cast.

Stars are born (on roller skates) with Carly Anderson as Kira and Samuel Edwards as Sonny. Their deadpan expressions and boundless energy never let you think they are in on the joke. It adds to the hilarity but in the end you are also in awe of their relentless (and often deadpan) determination to make sure we have a good time.

Xanadu is at the Southwark Playhouse until 21 November. Get your skates on before it sells out.