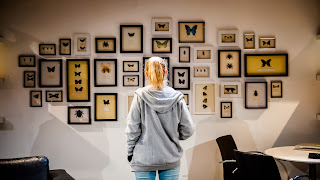 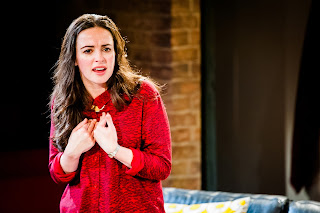 And there begins the tale of schoolyard bullying, betrayal and revenge. What is fascinating about the piece is how your sympathies shift as each new piece of information is revealed. Humour also helps to release the tension.

The production gives subtle clues about where things are heading. At one point I found myself thinking that knife is way too big to be just cutting that madeira cake…

The performances by the two leads also add a touch of credibility (and a lot of class) to this piece. MyAnna Burning is Carla. She is a rough, chain smoking pregnant woman with a brutal past. Burning delivers a sympathetic performance of a woman who seems to have moved on from her darker days.

Laura Donnelly is Heather. She is the cold and unfeeling woman, bullied at school to the point of cruelty and delivers a mesmerising portrayal of  a person trapped in the past. 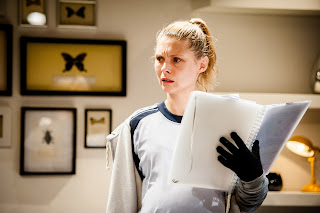 To give anything further away would be cruel. The intimate space of Trafalgar Studios downstairs, the subject matter, and an awful lot of chain smoking (this piece along with Hangmen must hold the current record for the most amount of onstage smoking), adds to the tension.

Social media also plays a key part in the story. As a tool to to stalk former classmates online, it may make you want to check just who you are friends with online when you get home from the theatre. Just in case…