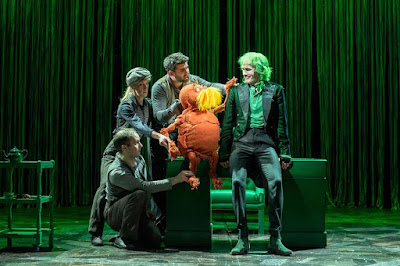 The Lorax, a beaver-like creature with a fabulous moustache, bursts on stage as a three man puppet after the Once-ler cuts down a tree. With his voice performed with gusto by Simon Lipkin, his commentary on the action is a mix of pompous indignation and cute sincerity. The repartee between him and the Once-ler (played by Simon Paisley Day) is a delight. But when he disappears, the show is much less fun.

It is a pity the show didn't focus on the two characters. It lacks irony in its heavy handed treatment of the material. The stage adaptation gives much more back story, but it comes at the expense of the simplicity of the original work. And the music seems to constantly stop the story rather than propel it along.

Dr Seuss's fable about the environment continues to have resonance, even if it does not translate well to stage (or screen). With wild weather, rising temperatures and debates about fracking we could all do with more of the Lorax around. If he had his own show he could tell us where we got it all wrong. Now that would be fun to see.

The Lorax runs at The Old Vic Theatre through to 16 January.