Three men and a panto: Cinderella and the Beanstalk @Theatre503 @wesleepingtrees 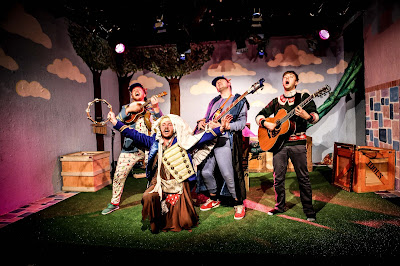 If there is one way to write a pantomime, Cinderella and The Beanstalk by Sleeping Trees at Theatre 503 tears up any rulebook.

It is a crazy little show full of as many pantomime or nursery rhyme characters. The end result is a frenzied and funny take on the pantomime and Christmas traditions.

The premise of the show is that James, Joshua and George have written a script, booked a venue and hired one lonely musician (in the form of Mark Newnham). But they have forgotten one small thing. Hiring any actors. After checking that it is alright with the audience (who are we to say no?), they decide that they are going to have to perform all the roles themselves. 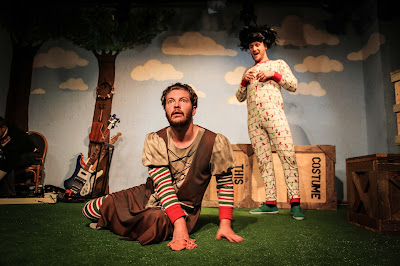 And so begins the odd tale of Cinderella, who is on a dangerous adventure at the behest of Rumpelstiltskin. He has blackmailed her to climb a beanstalk to retrieve some golden eggs. Meanwhile Prince Charming, a Fairy Godmother and a heavily pregnant cow do their best to get in the way.

So much is happening in this piece at once, that often the jokes collide into each other. In the end it is hard not to go along with this fast-paced and crazy take on pantomime conventions.

A hat or a jacket on top of some awfully Christmassy onesies is all that signifies a character change. Which helps when they are trying to portray several people in a single scene. And Mark Newnham and the boys keep things light and with some clever songs peppered throughout the piece. 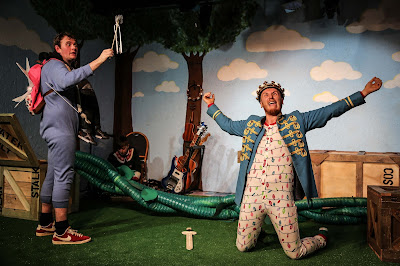 Not everything works.  The re-enactment of scenes from the movie Home Alone feels like an attempt to drag the show out. But the likability of the performers and the good natured and clean fun they are having, make for a fun evening of comedy and panto.

Sleeping Trees is the comedy trio consisting of James Dunnell-Smith, Joshua George Smith and John Woodburn. Theatre 503 staged this show last year. It was such a success it is having a repeat showing this year. Next year they plan to do Scrooge and the Seven Dwarves, which by the title alone is continuing in their messed up, frenzied tradition.

In the meantime, Cinderella and The Beanstalk runs at Theatre 503 through to 2 January. 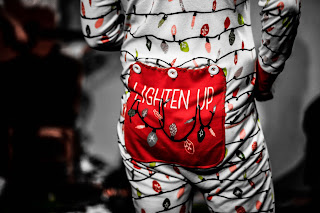